For four years at his indoor farm, in a desolate, industrial corner of Tuen Mun in Hong Kong’s New Territories, Russell Kong has been experimenting with strains of a very specific crop.

No dude, it’s not weed or anything illicit like that. Kong is the founder of Urban Mushroom and he is single-handedly trying to harvest edible fungus in the most eco-sensitive method possible, while trying to foster an economically sustainable enterprise.

“I did a sustainable agriculture degree in the UK and when I came back, I thought about what kind of agriculture I could go into,” Kong recalls. “My family owned a lot that used to be an old pig yard. There was a structure with a shelter and an indoor area so it’s not compatible for vegetables that need a lot of sunlight. I thought, how can I utilise the facility? And I started researching mushrooms.”

After numerous rounds of tests and research, he decided oyster mushrooms would be most suitable for Hong Kong’s climate and conditions. In addition to space and spores, Kong still needed something else – substrate, or organic material that mushrooms could be harvested from.

“You need a lot of agriculture waste for mushroom growing,” he explains. “Things like straw and compost. Hong Kong doesn’t have a lot of that so I looked at what was in abundance. I realised I could use coffee grounds and cardboard to start.

“So, I started collecting coffee grounds, asking Starbucks and Pacific Coffee. Then, I got cardboard from everywhere, including buying it from old ladies. It took me about a year to explore the right composition of the substrate and successfully grow some mushrooms.”

There are other mushroom producers in the New Territories, but they tend to be industrial operations. Few are trying to farm in as organic a manner as Urban Mushroom.

Not only is Kong doing everything himself, he readily admits he was a mushroom novice when his germ of an idea began. Even now, he confesses there’s still plenty of trial and (lots of) error.

“After the first year, I expanded from experimental tanks to a room-sized facility. Once things became relatively stable, I started to sell my mushrooms.” However, he notes: “Actually, I wouldn’t say the production is stable now. I still have a lot of failures in between, especially dealing with contamination, disease and bacteria from climate fluctuation.”

It also took some effort for Kong to zero in on the specific species of oyster mushrooms to raise. The three types he focuses on – the common oyster, the Phoenix oyster and the eye-catching golden oyster – are the most tolerant of substrate and weather.

“I tried other fungus species like lingzhi (widely used in Chinese medicine for its reported immunity boosting and longevity properties) but it doesn’t grow as well. The productivity is significantly lower.”

Currently, Urban Mushroom produces roughly 60 kilograms (132 pounds) of crop per week. For the academically minded Kong, a larger challenge is expanding his thinking from just about sustainability to profitability.

“It takes around two weeks after harvest for a new crop of mushroom to sprout. Some mushrooms I dehydrate for longer-term storage, to make it easier to sell. Fresh mushrooms are quite perishable and fragile.

“Even shipping it from Tuen Mun to Hong Kong Island could be an issue. Because we’re trying to grow in an environmentally friendly basis, we do not have a strict climate control system so productivity fluctuates with the external environment.

“I am hoping to expand in different ways,” he adds. “I am currently building a second growing room to improve productivity. If I can reduce my operation cost then I can also make it more price friendly. Because I don’t have to pay rent, that made things a lot easier already. But my biggest challenge is my personality. I am very used to doing everything myself. I’m really a one-man band.

“I’m also doing more education activities and classes in mushroom farming for families and kids. I am making mushroom bags and developing decorative hydroponic boxes that people can buy and take home to watch and grow their own mushrooms.” 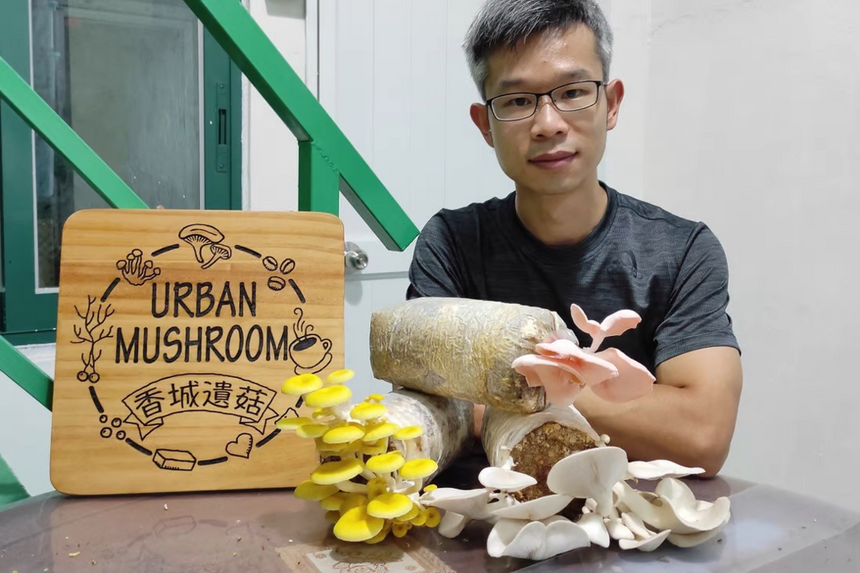 How to Include Accessibility in Design Documents
Tim Dixon